Hey dudes and dudettes. I hope everyone has had a lovely 2015 so far. I've basically been living inside of one of my tiny HausCraft boxes where it smells amazing and everything is filled with magic. Ceej and I have been really busy stamping and stickering, mixing potions and packing boxes. We are expanding in all sorts of glorious directions, LIKE MAKING CUSTOM SPELL KITS (deets on that later) and collaborating with all sorts of talented and inspiring people.

One of those folks is Autumn Deslauries, our graphic designer. Autumn runs her own boutique graphic design company called Secretary Deluxe. She creates all of our amazing branding, puts up with my raging OCD, and sends funny and encouraging emails. She’s basically our MVP. In an attempt to show her how much we appreciate her, we decided to make her a custom HausCraft kit for Christmas.

Back in the day when Autumn and I were first corresponding about a minor re-branding for HausWitch we decided that she would redo my logo and I would long-distance HausWitch her office as a trade. I loved the idea of being able to offer long distance decorating services and thought this would be the perfect way to try it out and formulate a plan for how it would work. And then HausCraft happened, and Secretary Deluxe blew the fuck up.

So between how busy we’ve both been working on HausCraft, and our individual projects, Autumn’s HausWitch-ing took a back seat. Until I realized, we could make her a DELUXE Custom Kit. A SECRETARY DELUXE Custom Kit, complete with everything I would buy for her office makeover. Well, everything that I could still pack up like a kit. I literally can not stop packing things up into kits. It’s like some primal force that has always been inside me and now that it's surfaced it cannot be stopped.

So, first we made her spell kit.

Knowing how hard this girl works, doing artistic work, late into the evening, I really wanted to make her spell fit for a badass creative professional. Something that could address how facing a deadline can basically destroy your creativity, and how looking at something for a long time makes it into something you can't even understand anymore.

Since this was a surprise I had to come up with my own bootleg versions of her designs for the kit.[/caption]

So the theme for her kit was: "Sometimes all you need to move forward on a project is to take step back." I included a bundle of sage to smudge out any stagnant or anxious energy in her office space, and one of my favorite fancy candles of the moment, "FORTUNE TELLER" by Blackjack Wax Company. I mixed up some a "Midnight Oil" anointing potion with peppermint and coffee bean infused grapeseed oils for those bleary eyed late nights, and the biggest, most badass piece of pyrite I could find. Pyrite stimulates the mind, boosts confidence and kicks your ass into finishing projects too. Ceej calls it the OCD mineral and uses it as a paperweight. Perfect, right?

Then came the office supplies. Wow, did I have fun with this one.

Autumn and I have a similar esthetic so I knew I would go for clean, modern, slightly witchy theme.

So I put it all together in a sleek, black box from IKEA and shipped it all the way to Minnesota and just like that, we had our first official Custom HausCraft kit. AND NOW YOU CAN HAVE ONE TOO!!

Starting next week, HausCraft will be offering Custom Spell Kits. You send us a little info about your living/working space-related issue, and we'll make a specially crafted and curated tiny box of magic JUST FOR YOU! Stay tuned for deets. I promise you these are going to be live in the Etsy Store before the 21st because Mercury is going retrograde that day and I'll be damned if I'm going to launch anything while that's going down.

But the most exciting thing of all is that you can also have a little piece of Secretary Deluxe all to yourself too! Autumn has generously offered some of her services for a first ever HausWitch GIVEAWAY!!! 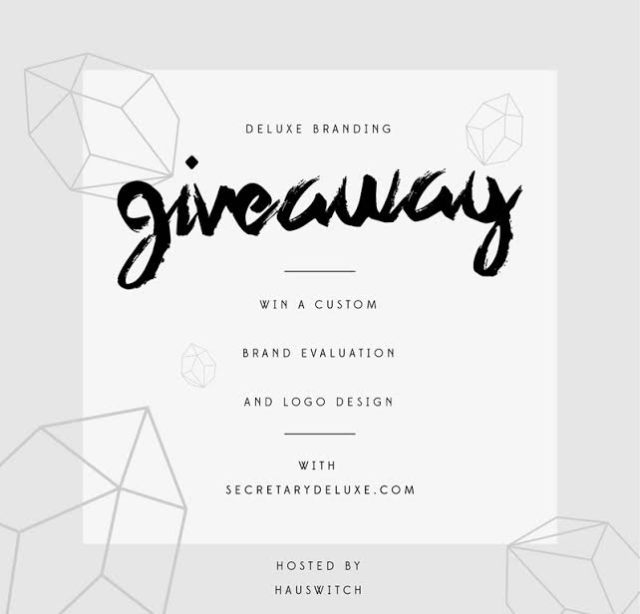 Holy Moly. Okay, so all you need to do to enter is leave a comment below, or "like" on the graphic above on the HausWitch Facebook page (which you should "like" if you haven't already) by January 31st.

The moon AND sun are in Capricorn and the witches say, "Slow down".